Kumamoto is the birth place of the Red Cross in Japan - it is Solferino of this country; a neutral medical relief organisation was born in 1877 during the Satsuma Rebellion, Japan’s civil war in Kumamoto. Its history, culture, and pride as a forerunner in the humanitarian work cultivated Kumamoto Red Cross Hospital as a top level of medical relief provider, both domestically and internationally, amongst 92 Japanese Red Cross hospitals. In fact, Kumamoto Red Cross Hospital has long records of providing their experienced medical personnel to the movement responses from the onset of Japanese Red Cross international activities in 1979. It also developed innovative domestic response tools, such as a dERU (domestic Emergency Response Unit) as well as a Super Mobile Clinic, which was mobilised in a number of important occasions, such as the G8 Summit in Okinawa of 2000 and in Hokkaido of 2008.

Kumamoto Red Cross Hospital played a crucial role as a front line medical facility in receiving many injured persons from the devastating earthquake in April. As some of the major hospitals in Kumamoto area was unable to function; and therefore, the burden on Kumamoto Red Cross Hospital has increased dramatically. In fact, it is the hub disaster medical relief hospital in Japan; simultaneously, members of staff have been well trained for an emergency relief operation. During the Kumamoto Earthquake Disaster, a function of the hospital represents a number of significant humanitarian capabilities of carrying out alleviating activities in general as the followings:

Simultaneously, Kumamoto Red Cross Hospital provided relief not only for medical matters but also played a key role for management of sanitation at evacuation centres. For example, it established the water sanitation system at evacuation shelters. Water was used for hand-wash, resulting in reducing the risk of an infectious disease. A number of highly skilled staff, who involved in the international emergency responses as an engineer, managed to build this system. 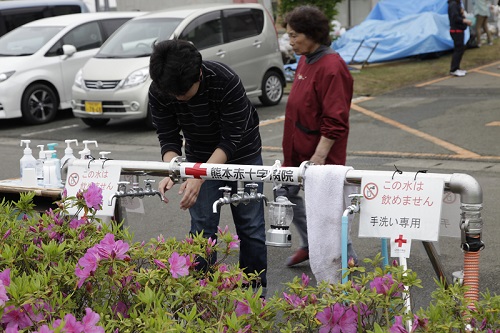 Evacuees are washing their hands with sanitation water.

The network of the Japanese Red Cross Society in Japan is profoundly vast and strong in the global arena of the Red Cross and Red Crescent Movement. Prefectural Chapters within hours despatched medical professionals and volunteers to support its emergency response. Without the support from its network, it would have been difficult to deal with the situation as many staff of Kumamoto Red Cross Hospital were also seriously affected by this disaster. In fact, approximately 60% of Red Cross medical staff and their family were affected – their houses were totally collapsed or damaged. As a consequence, a number of staff stayed at their cars or evacuation centres, while they carried out tireless relief operations.

The blood supply programme of the Japanese Red Cross Society is also nationwide. The organisation has a number of blood donation rooms throughout Japan. In regard to the Kumamoto Disaster, a blood donation room in an affected zone was hit by the quakes; and consequently, it faced to close its programme. However, other active blood rooms in this country covered the blood programme in Kumamoto. They effectively supplied blood for victims in need.

The Japanese Red Cross Society, successfully producing the rapid repose to the disaster, has been saving a large number of victims in Kumamoto both physically and mentally. However, many people still stay at evacuation centres or sleeping at their cars due to the fear of possible collapse of their houses hit by an unexpected tremor. Psychosocial support for both affected population and aid workers becomes essential at this stage. Tremors have been occurring more than 1,300 times since major quakes hit Kumamoto on 14 and 16 April. 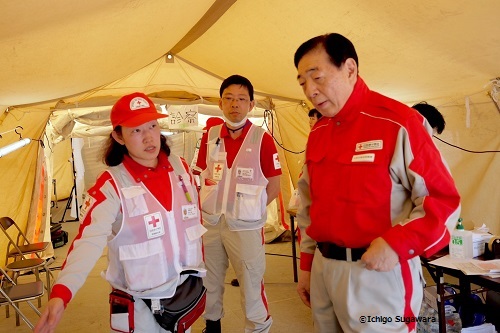