The recent international situation reveals that armed conflicts caused by ethnic and religious strife around the world are producing a large number of refugees and internally displaced persons. A great many people are also being affected by natural disasters, and the number of people dying because of food insecurity and infectious diseases such as HIV/AIDS is not decreasing. Against such a backdrop, expectations are ever increasing that the Red Cross, with its global network, will fulfill its many roles. 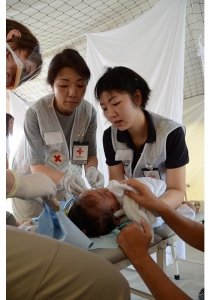 Whenever a large-scale disaster or conflict occurs, it is imperative to rapidly provide emergency relief to the affectedin the form of medical care, shelter and relief items, such as food and clothing. The JRCS, as a member of the International Red Cross and Red Crescent Movement (Movement), considers it its primary responsibility to provide support for relief activities organized by its sister societies in affected areas, it stands ready to fund any emergency appeals launched by the ICRC or IFRC. In fiscal 2012, the JRCS funded 37 emergency appeals contributing a total of ￥297 million.

Leveraging the capabilities of its 92 medical facilities nationwide, the JRCS is prepared to dispatch highly professional medical and healthcare staff at a moment’s notice from the IFRC and ICRC. The JRCS conducts relief activities overseas under the direction of the ICRC if an emergency arises in countries and regions in conflict situations; this is called the Rapid Deployment mechanism. It also collaborates with the IFRC to dispatch Basic Healthcare Emergency Response Units (ERUs) – mainly in the case of natural disasters.

In order to be prepared for these situations, the JRCS unremittingly trains its personnel and maintains the necessary relief supplies even in times of relative peace. For example, it maintains a stock of disaster relief equipment in a warehouse in Malaysia, to effectively respond to crises in the natural disaster-prone Asia Pacific region; the stock contains enough supplies – in the form of 10 different relief items like blankets, family-sized tents, etc. – for 10,000 households. The JRCS also supports local forces to procure relief materials, and assists in training local relief personnel involved in water supply and sanitation. This enhances the emergency response capabilities of disaster-prone countries.

From emergency relief to recovery assistance, the JRCS has adapted a seamless, all-encompassing set of processes to aid in the recovery of disaster-stricken areas, whether the cause is human or natural. The JRCS aims to alleviate suffering by providing medical support; it helps people in affected areas deal with illness in addition to other misfortunes to which they are typically vulnerable. Furthermore, the JRCS works to help those affected by a disaster to rebuild their lives, and strives to improve the managerial capacity of National Red Cross Societies in countries affected by a disaster.

The JRCS aids in the restoration and reconstruction of damaged houses and medical facilities. It also helps local National Red Cross and Red Crescent Societies stockpile relief supplies, train volunteers, and organizes workshops to promote disaster preparedness in local communities. In doing so, the JRCS aims to encourage the development of efficient disaster responses in communities overseas.

In many developing countries, local communities are inadequately equipped to handle natural disasters. As a result, many people are deeply affected by events such as droughts and floods. The JRCS demonstrates its commitment to the Movement through its sustained support for community-based disaster preparedness and risk reduction. Its international efforts are particularly concentrated on the Asia-Pacific region, one of the most disaster-affected areas in the world. The JRCS is actively involved in various disaster preparedness projects throughout Asia and has adopted a grassroots approach to training local communities in disaster management and mangrove afforestation.

Many people around the world lose their lives simply because they lack access to standard social services (namely medical services, healthcare and sanitation). The JRCS is implementing various projects, mostly with the assistance of local volunteers, to prevent diseases by administering a sustainable supply of clean water and basic sanitation facilities (e.g. toilets). Africa is the main focus of these efforts, where the JRCS is emphasizing three areas in particular: reducing infant mortality rates, improving maternal and child health, and controlling the spread of infectious diseases.

Restoring family links refers to the maintenance and restoration of bonds between members of the same family who have become separated due to conflict, disaster, or the severing of diplomatic relations. The Japanese Red Cross Society takes supportive measures to restore these family links through a series of enquiries and investigations, while also taking into account the emotions of the person(s) in question.

The JRCS works closely with the Fire and Disaster Management Agency (FDMA) when handling cases linked to/confined within Japan. The combined efforts of these two entities allows for a cooperative system designed to investigate the safety of missing persons and restoring family links. This collaboration was first introduced in 2004 along with Japan’s Civil Protection Law. Bearing in mind the various support needs in the event of a large-scale natural disaster, the JRCS is currently also in negotiation with other entities devoted to this issue.

Donations raised through the NHK International Helping Hand Campaign are the primary source of funding for international activities conducted by the JRCS. The Japan Broadcasting Corporation (NHK) has broadcasted this campaign nationwide every December since 1983.

During the campaign, the JRCS takes in donations with the help of volunteers at Red Cross facilities all over Japan. Donations are also collected at NHK broadcasting offices across the country, and financial institutions such as banks, post offices and agricultural cooperatives allow donations to be made via bank deposit transfer. The campaign raised ¥21.8 billion from 2.44 million donations made between 1983 and 2012.