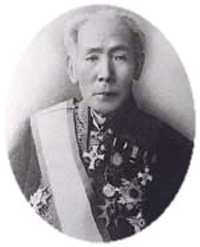 1877: The Society was founded by Count Tsunetami Sano, as the Philanthropic Society, during the battles of the Southwestern Rebellion.

1886: The Japanese Government pledged to adhere to the Geneva Convention of 1864. The Society's first hospital was established in Tokyo.

1887: The Philanthropic Society changed its name to the Japanese Red Cross Society and was recognised as such by the International Committee of the Red Cross on 2 September 1887. In July the Society first engaged in disaster relief by assisting casualties of the Mt. Bandai eruption.

1890: Training of nurses began at the Red Cross Hospital in Tokyo.

1906: The San Francisco earthquake and fire in April gave the Society its first opportunity to extend relief to a foreign country. The Society collected US$146,000 for the American Red Cross.

1919: The Society was one of the five National Societies that took the initiative in establishing the League of Red Cross Societies.

1922: The Junior Red Cross was started at a school in Shiga Prefecture.

1923: On 1 September a major earthquake hit the Tokyo area, causing serious damage, and the JRCS conducted relief activities for the victims.

1934: The Society hosted the 15th International Conference of the Red Cross.

1947: The Society created Home Nursing, First Aid, and Water Safety programmes similar to those of the American Red Cross.

1964: The Government Cabinet decision to promote blood donations, in place of blood sales and deposits, contributed to the rapid expansion of the Society's blood programme, which had started on a modest scale in 1952.

1970: The Society hosted the Konnichiwa 70 Technical Seminar for the Southeast Asian and Pan-Pacific Regions in the Field of Red Cross Youth.

1977: In commemoration of its centenary, the Society hosted the 4th Asia and West Pacific Seminar on the Red Cross Blood Programme.

1983: The NHK International Helping Hand Campaign was launched as a joint event with the Japan Broadcasting Corporation (NHK).

1986: As a measure to help prevent HIV/AIDS from spreading, the Society began screening for HIV positive antibodies at every blood centre starting in November.

1988: In September, at the government's request, the Society began making payments to Taiwanese war-disabled and to the bereaved families of those who died as a result of being drafted into the Japanese army during World War II. This was done in cooperation with relevant organisations.

1991: In commemoration of the centenary of its Nursing Training Programme, the Society held a symposium, inviting instructors from all JRCS nursing schools and hospitals, aimed at training nurses in Japan to meet the challenges of the 21st century.

1995: The Great Hanshin-Awaji Earthquake hit the Kobe area on 17 January causing serious damage, and the JRCS conducted relief activities for the victims.

1997: The Society celebrated its 120th anniversary.

1999: The International Humanitarian Law Forum was held in the Tokyo on 12 August to celebrate the 50th anniversary of the Geneva Conventions of 1949.

2004: Japan became a party to the 1977 Additional Protocols to the Geneva Conventions.
The Society hosted the 3rd International Red Cross and Red Crescent Donor Forum in Gotemb,Jaban.