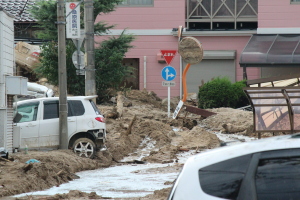 Since 20th August, torrential rains have lashed Hiroshima prefecture in Western Japan causing flash flooding and landslides which have claimed the lives of 39 people. A further 52 people remain missing and more than 168,000 people have been advised to evacuate to safer ground. According to the Japan Meteorological Agency, a total of about 240mm of rain fell on the city of Hiroshima within 24 hours, equivalent to a month’s rainfall. The force of the landslides in the affected area destroyed roads, buildings and other infrastructure in mountainous areas.

Evacuation advisories have been sent to around 70,000 households by the authorities
Rescue efforts are ongoing by the prefecture’s police and firefighters. Some areas are inaccessible and helicopters are being used to lower rescuers into the affected areas.

“It’s been three days since I got here. My house was covered with mud and it was very hard for me to get out. ”, explains a 60 year-old man housed in one of the evacuation centers. “The landslide destroyed my office which was right next to my house. I called a taxi but they couldn’t reach me, so a police officer helped me and drove me here to this evacuation centre. I desperately want to go back home but the evacuation order in my district is still on”, he says. 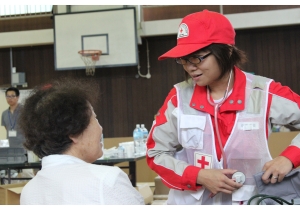 Two medical teams with support staff have been deployed from the Japanese Red Cross Hiroshima Chapter and the Red Cross Hiroshima Genbaku Hospital. One team is currently providing mobile clinic services in several of the evacuation centres set up in local schools and government administration offices. The Hiroshima Genbaku Hospital has also been receiving injured patients and is providing psychological support services.

The evacuation centres are filled with elderly people, many of who are worried about their health. Yasuyo Yamada, head nurse with one of the Red Cross medical teams commented, “A large number of people have high blood pressure. I think it’s because of their anxiety over the past few days. Some of the elderly haven’t been eating properly. We are worried about their health since this evacuation could last a bit longer.”

The Red Cross has also mobilized relief items which have been distributed to the evacuation centers. As of 21 August, 1,110 blankets and 462 emergency kits had been distributed. Each emergency kit contains 25 items including towels, a cup, utensils, toothbrush, a flashlight and portable radio; most evacuees left with nothing when they were forced to flee their homes.

One elderly evacuee had a lucky escape. “On the day of the disaster, rain was pouring down heavily and there were lots of lightning. The rain continued for a few hours and when I looked out the window, I witnessed the landslide. I got extremely worried about my neighbour and went to see her house. It was completely destroyed and I immediately rang the fire department for help”.

Although the rain has abated today, the skies in Hiroshima remain cloudy and local residents continue to seek safety at the evacuation centers, prompting the government to open new shelters.

The Japanese Red Cross has launched a national emergency appeal and the funds raised will be distributed as cash grants to those affected by the disaster. A grant disbursement committee will be set up, led by the prefectural and municipality governments.