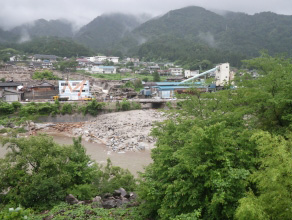 As Typhoon Neoguri pushed through Japan's main island, passing Tokyo, the powerful storm provided a key test for early warning systems, upgraded since the 2011 tsunami, and Red Cross measures to support the most vulnerable.

Classed as a Super Typhoon as it surged towards Okinawa, Neoguri hit the southern island on July 8, prompting authorities to advise more than 500,000 people to evacuate. It continued into Kyushu and slowly moved toward the western part of Japan’s main Honshu island.

By July 10, according to Fire Department figures, three persons had died and several more were seriously injured, along with dozens of minor injuries. Nearly 400 homes were flooded and tens of thousands of households were left temporarily without power.

“As well as the gradual reduction in strength of the storm system, which had looked the most powerful to threaten Japan in at least 15 years, the relatively limited casualties and damage can be partly put down to human factors,” said

“Generally thorough disaster preparedness helped and specifically the Japan Meteorological Agency (JMA) has been using a new Emergency Warning system since August last year, giving people a much clearer idea of how severe the hazard may be, enabling them to evacuate earlier.”

The system has clear guidelines differentiated according to the seriousness of the hazard. Typhoon Neoguri’s approach triggered the “Emergency Warning,” defined as a level of intensity observed only once every few decades.

JRCS signed an agreement with JMA in March, as part of Red Cross work to enhance community resilience and disaster preparedness and this storm system provided the first opportunity to put into practice the new coordination mechanisms. 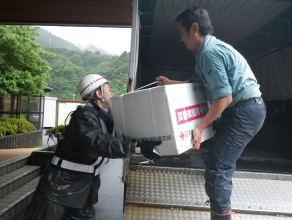 As the storm approached Okinawa, the local JRCS Chapter loaded up trucks with 500 blankets and 240 Emergency kits (consisting of portable radio, flashlight, towels, and health information leaflets) for distribution in case of need. They also made warning calls or home visits to nearly 70 elderly households who are regular attendees of or living near to a Red Cross welfare complex in the main city of Naha.

As the storm moved to more northerly parts of Japan, JRCS Nagano chapter distributed 150 blankets, 20 sleeping kits (including a sleeping mat, pillow, eye shades, earplugs, slippers and socks), to residents in evacuation centres. In other areas affected by the heavy rains and landslides brought by a combination of the typhoon and seasonal downpours, Red Cross staff and volunteers are also distributing supplies to displaced residents.